Final race for World Championship and OLR Beogradski AS Pobednik will be on September 24th,2021.

On 26 th of August 2021. OLR “Belgrade ACE the Winner” organised the 2nd race of the FCI World Championship from Aleksinac (170 km).

Dear FRIENDS,
You probably expect that we, as the organizers of OLR “Belgrade ACE the Winner” and FCI World Championship 2021, address to you due to the situation that befell us on August 26 during the realization of the second race from Aleksinac (170 km).

There is a proverb in our people: “after the battle, everyone is a” general “, leaders who know best where the mistake was and if someone asked them, they would do it differently.

The fact is that we, as organizers, are most responsible for this situation. For this reason, we conducted an investigation to determine where we went wrong and whether we could have avoided the catastrophe that befell us.

Due to the significance of the event, we had a meteorologist, who monitored various available satellite forecasts and based on that it was estimated when to let the pigeons run (training).

Our mistake, and the majority of racing pigeon breeders, is that we rely on the various available satellite forecasts over the Internet that are primarily made for human use and NOT for the purposes of COMPETITIONS WITH POWER PIGEONS.

At the same time, we have no knowledge that there are scientifically established facts about what conditions need to be met in order for pigeons to be released from the competition site. Such decisions are made based on experience and available weather forecasts.

In order to find out the truth about what happened to the pigeons that participated in our competition, we addressed to the Serbian scientist Mr. Milan T. Stevancevic, who is an partisan of HELIOCENTRIC ELECTROMAGNETIC METEOROLOGY and is actively engaged in research in this field in Serbia and has done a lot of scientific work.

Since he deals with science, he has access to sites that we do not have, which show detailed weather situations around the world, especially how they are related to the influence of reactions that occur in the “sun”.

When he opened the appropriate site, he only said that from August 24 to September 2, we do not have the conditions for a safe flight of pigeons from Aleksinac to Belgrade.

He opened the data for August 26 and he only said that we had strong “gusts” from Ćuprija to Belgrade from the east (up to 14 m / s), which means strong side “gusts”.

These strong east, side, “gusting winds” acted from Ćuprija and the strongest action was at the entrance to Lapovo, which forced all 6 flocks to turn sharply to the left from their direction (they were visually seen from the OMV pump located near Lapovo by breeders who from there released the training of their pigeons).

According to satellite images of the action of winds in the directions, height and strength of action, in that part of Serbia, pigeons could fly to Valjevo as much as possible because there were “gusting winds” that could direct the pigeons to the southeast, towards Krusevac, Nis and Bulgaria. Bearing in mind that these were young pigeons, without experience, who were kept in a flock and flew like that, they used a favorable wind for them and set themselves to have the wind blow in their backs and based on that they moved away from the OLR location. By the way, the first pigeons arrived at the OLR location from the direction of Valjevo.

A similar situation happened on September 30 during the competition of young pigeons from the Federation of Serbia that released from the south and the arrival point was in the north. All breeders had great losses. The breeders from Belgrade released their pigeons from Pojate (near Aleksinac), that day about 1600 pigeons had the arrival of about 25%.

Why they had losses? The explanation is that they were affected by western, strong, lateral, “gusting winds” that forced the young pigeons to turn east towards Romania. On that day, a large number of young pigeons ended up in Romania, and some even reached the border between Romania and Moldova. Due to that, the arrival of these young pigeons on the second, third and other days was negligible. According to all available weather forecasts, there were no strong “gusts of wind” and the weather was sunny and without rain. 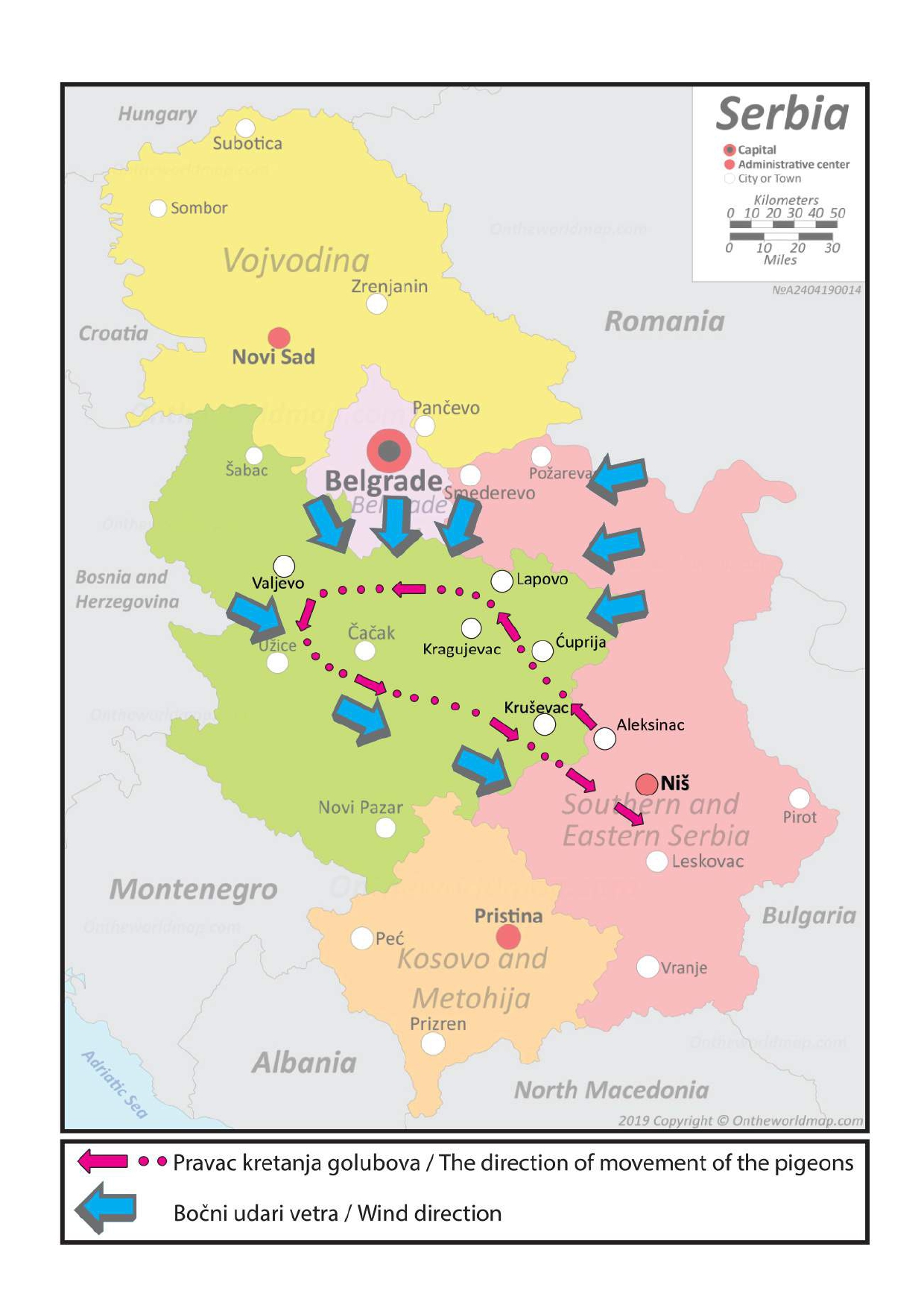 Maybe the arrival of pigeons in our country on the 27th, 28th and 29th would be higher, but in those days in Serbia it rained lightly throughout the day and the clouds were low and there was a lot of humidity in the air. The whole flock of young pigeons present was healthy and it was certain that 90% were in good condition, which caused them to fly far in the opposite direction, carried by the “gusts of wind” that acted that day during their flight.

The fact is that one of the most important weather parameters for a safe flight of a postman is the speed and direction of the wind, ie the existence of “gusting winds”, on the path of movement, from the place of release to the place of arrival. For us, breeders, there are weather forecasts that show the direction and AVERAGE wind speed at a height of up to 10 meters.

By applying HELIOCENTRIC METEOROLOGY, which is supported by new SATELLITE ELECTROMAGNETIC MEASUREMENTS, it is possible to precisely obtain data on the direction of winds and the manner and speed of action at altitudes above 10 m, as well as the consequences of the action of the SOLAR WIND, ex. atmospheric river.

Milan T. Stevančević gave us a recommendation that the third race be held on September 3, 2021 and that the pigeons be released after 9 o’clock, ie they could leave Pukovac at 10 o’clock, which we did. The path by which the pigeons fly from Pukovac to Belgrade was safe, having in mind the parameter of the action of winds and electromagnetic conditions. The pigeons flew this race well.

With this in mind, we hired a team of Mr. Stevancevic to determine which days are safe for the flight of the fourth and fifth race.

Based on everything we have exposed in this letter, we want to inform you that the final flight is moving. When the conditions are created for the precise determination of the safe day for the final flight, we will inform you in a timely manner.

Meeting between Mr. Istvan Bardos, the President of the FCI and the Deputy Mayor of Cukarica, Mr. Branislav Celic, and a member of the council in charge of sports, Mr. Slavisa Sotra.
Visit of Mr. Istvan Bardos, the President of the FCI and Dr Gabor Schindler was organized on the 1st and the 2nd July 2021. The visit was organized after the end of the reception of the national teams, when all the accepted pigeons went through the period of adaptation and started their release from the loft.
The Municipality of Čukarica and the City of Belgrade, in the name of Serbia, are sponsors of the FCI World Championship 2021. 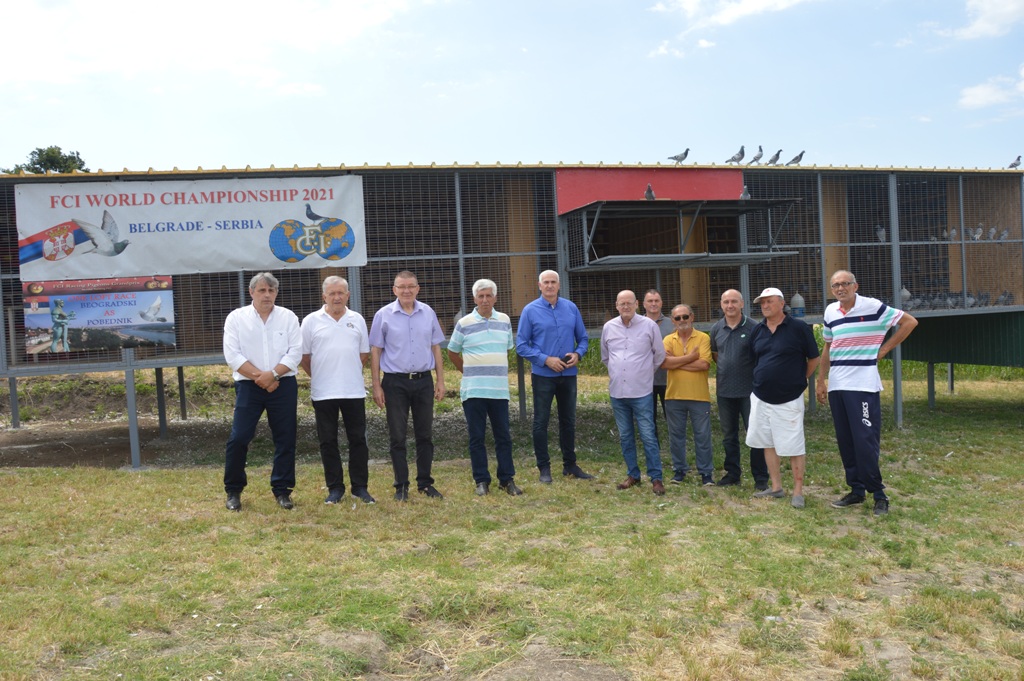 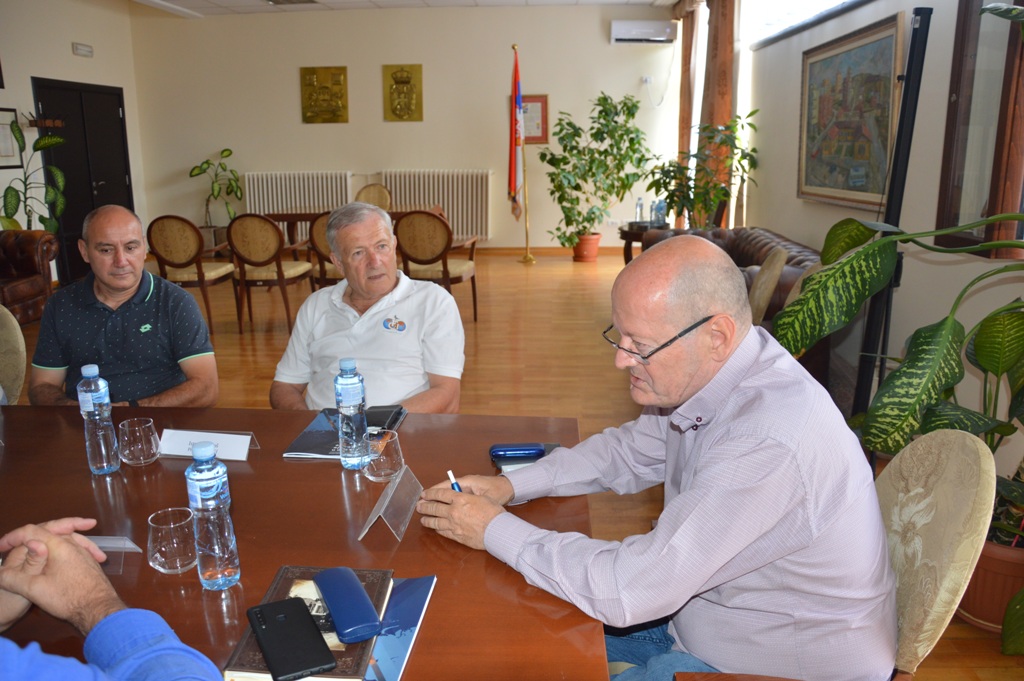 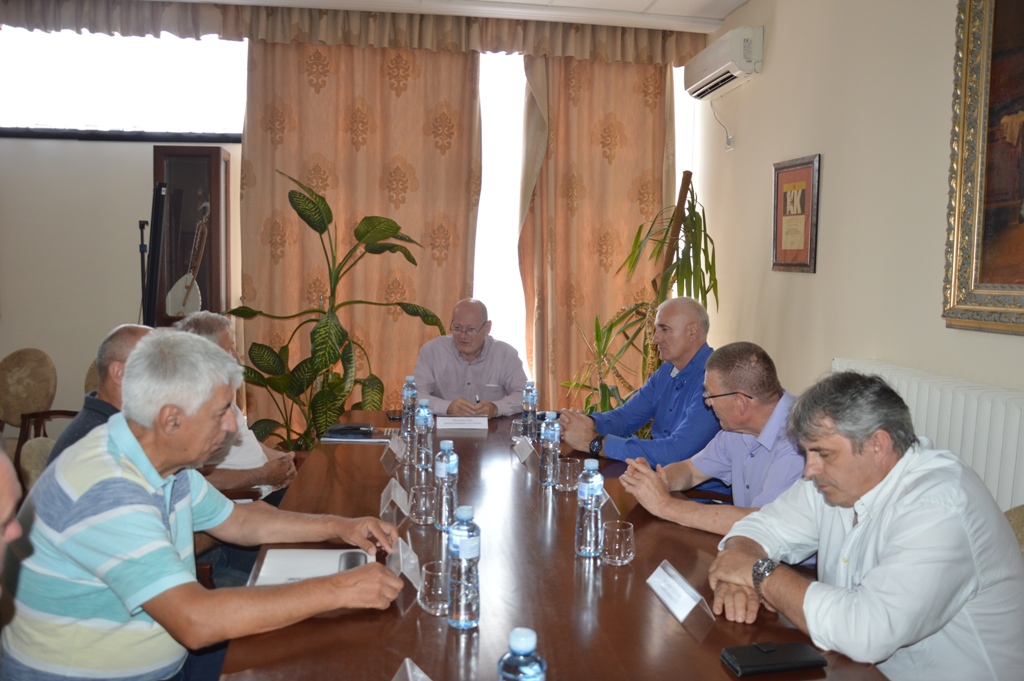 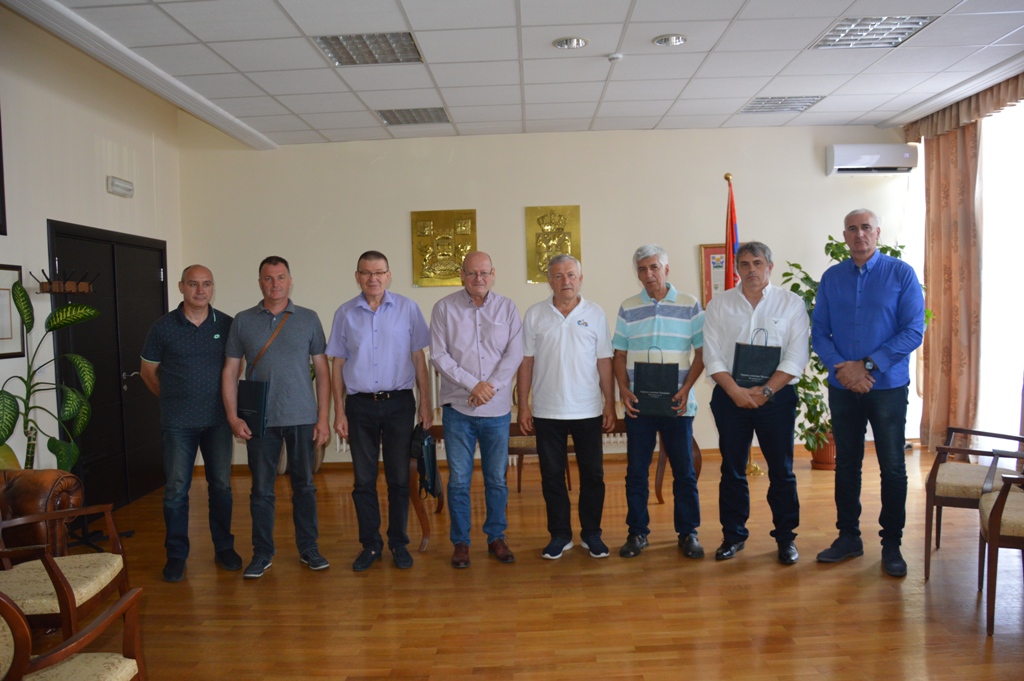 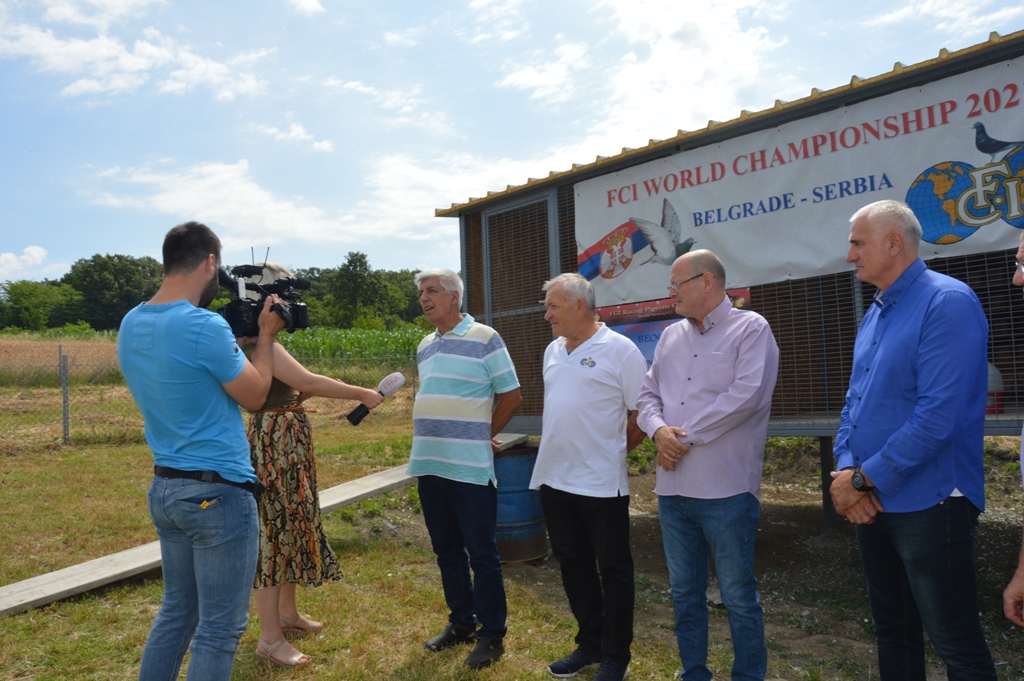 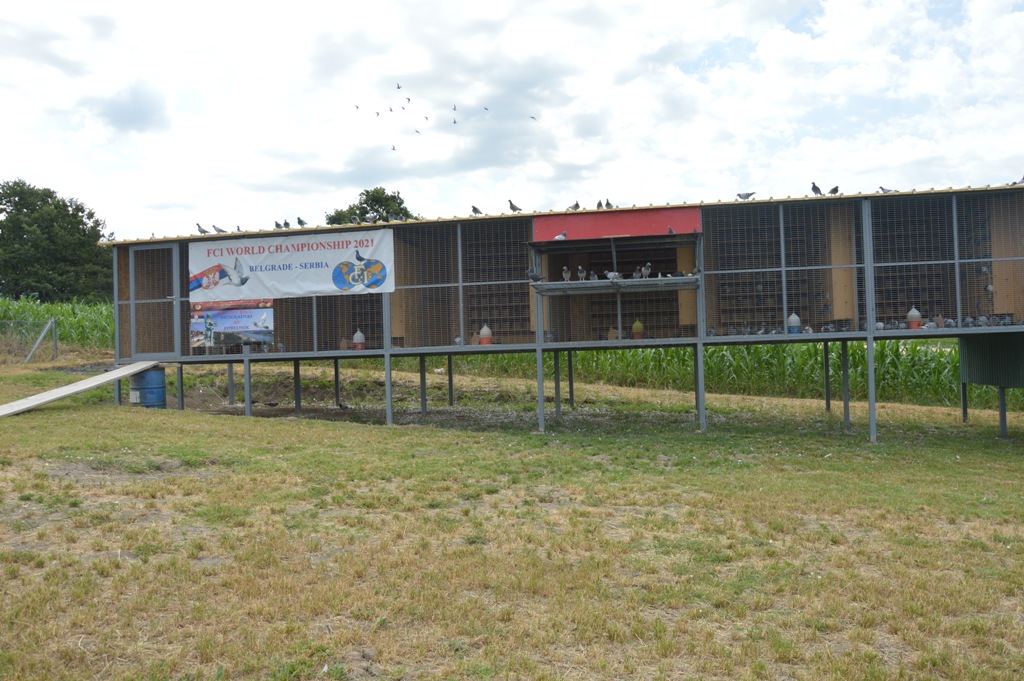 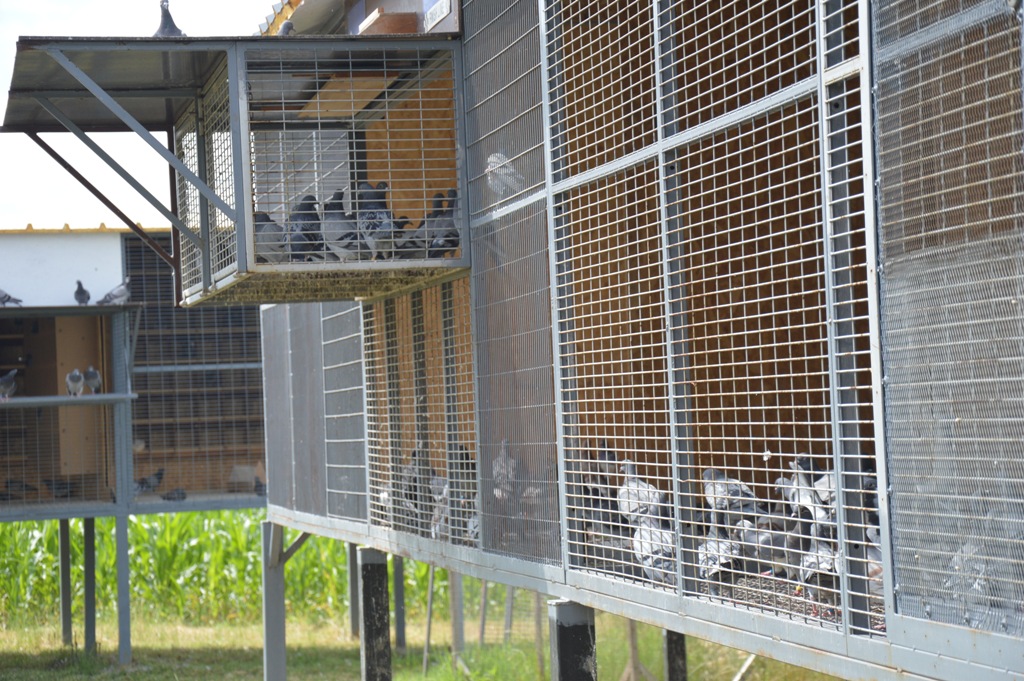 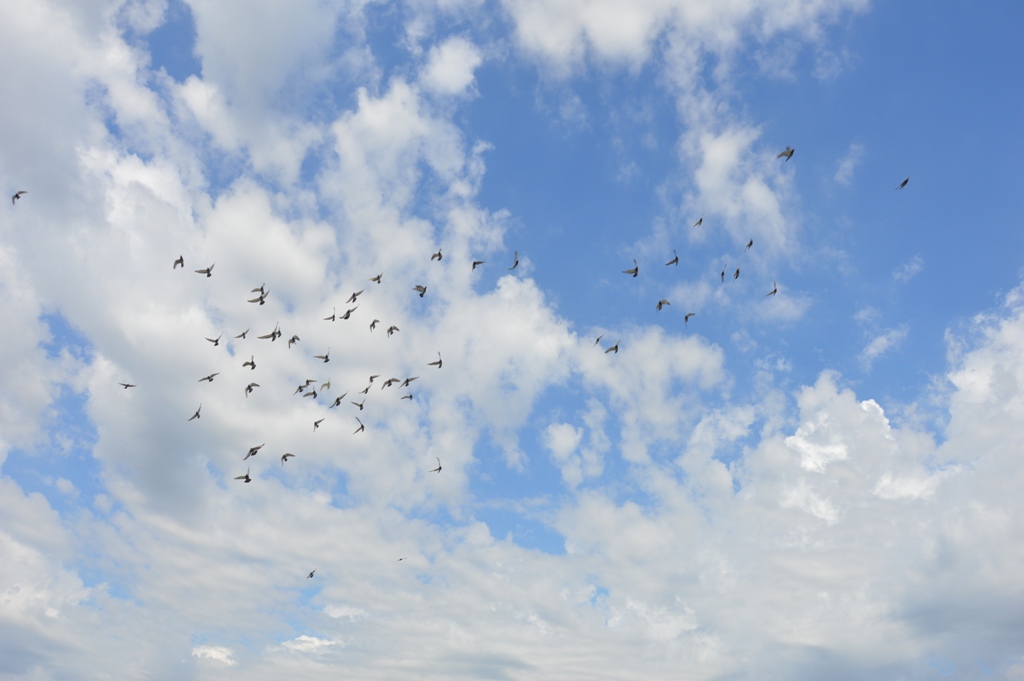 FCI World Championship 2021 is organized in Serbia in its capital Belgrade.
Belgrade - WHITE CITY - on the banks of the Danube and Sava rivers, is a city with a rich history, cultural tradition, sports tradition, tourist facilities, where every guest feels comfortable and welcome.
In Belgrade, the White City, for the third time, the competition of white racing pigeons is being organized at the FCI OLR "Belgrade ACE the Winner".
This year, this competition is being organized together with the FCI World Championship 2021.
We invite all breeders from around the world who have white pigeons in their lofts to send their young pigeons to FCI OLR "Belgrade ACE the Winner", and compare them with other white pigeons and pigeons in another color.
Sign up, maybe your white racing pigeon is the one who will be the best, the WINNER.

To this date, 32 National Teams, members of the FCI have registered participation with 60 young pigeons at the FCI World Championship 2021.
Every breeder is honored and proud that his pigeons are members of the national teams of their national federations. If they are not in the National team, by participating in FCI GRAND PRIX OLR "Belgrade ACE the Winner", you have the opportunity to compare the quality of your pigeons with pigeons from around the world.
A great challenge and motivation is the competition with the world elite. This year, for the first time, at the FCI World Championship 2021, we have already registered 32 national teams with 1920 pigeons in total (so far there were a maximum of 25 participants)
By participating in the FCI GRAND PRIX OLR "Belgrade ACE the Winner", in addition to comparing with the best pigeons in the world, you are able to win points for ranking in the FCI Grand Prix competition, and at the same time to participate in the distribution of the prize fund of at least € 50,000.00. We invite you to apply on time, because the interest is great, and we have the opportunity to receive a capacity of 4000 pigeons.
The collection of pigeons from Europe is organized on April 24 and May 15. Book a place for transport and participation. FCI World Championship 2021 is the biggest international pigeon event in 2021, BE A PART OF THIS COMPETITION.
Additional information on the website www.beogradskiaspobednik.rs or via e-mail address bgaspobednik@gmail.com Belgrade 10/03/ 2021 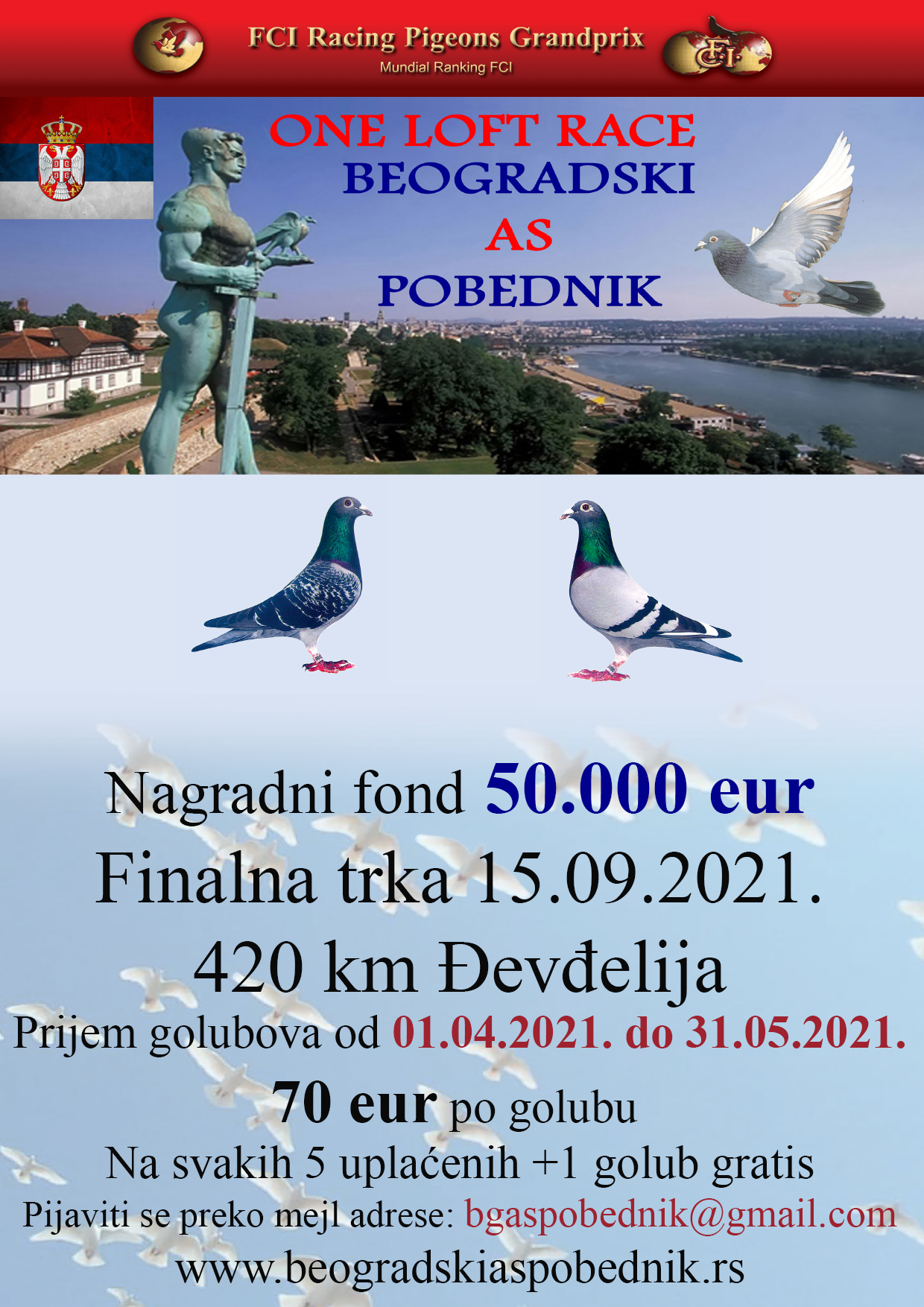 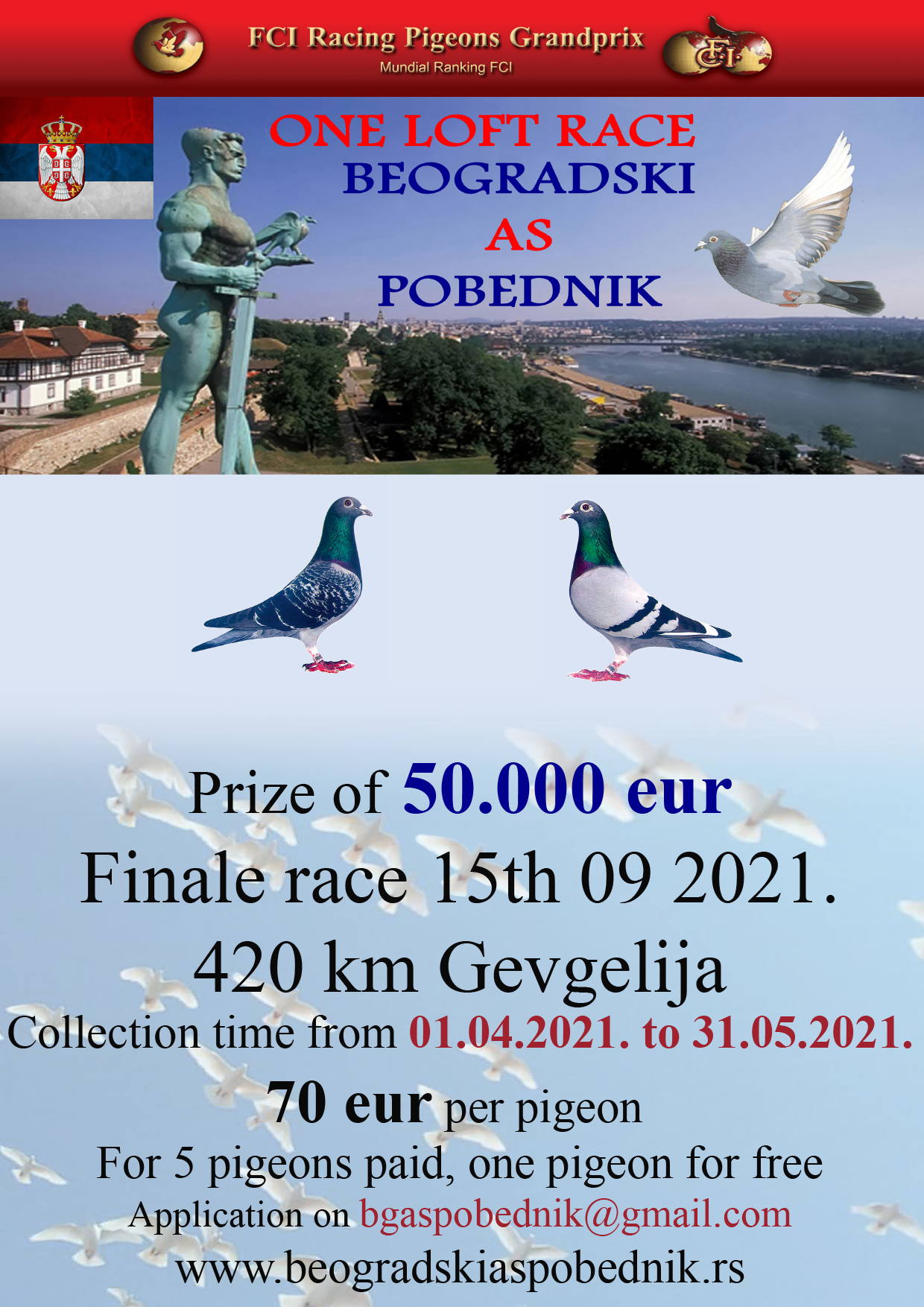 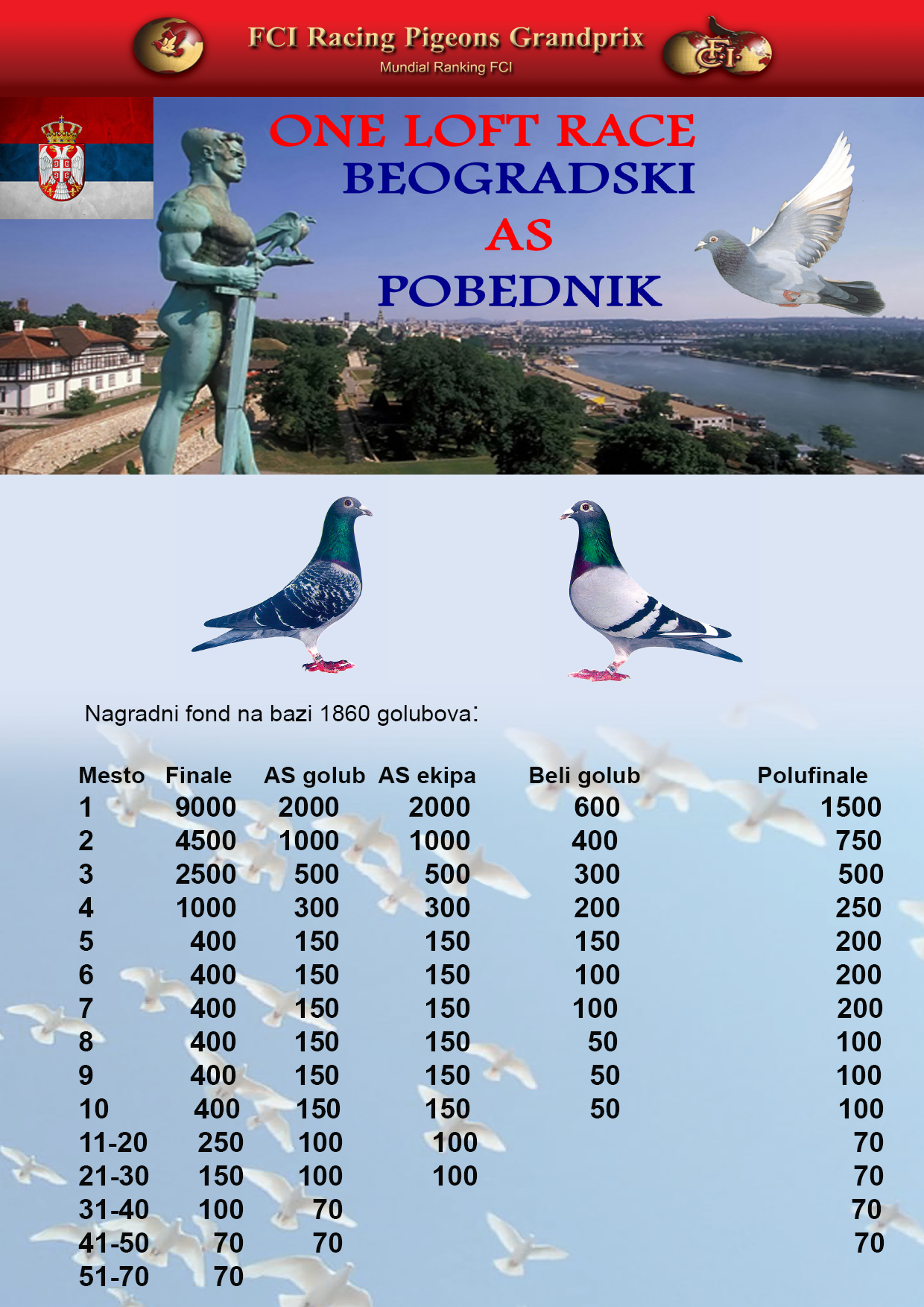 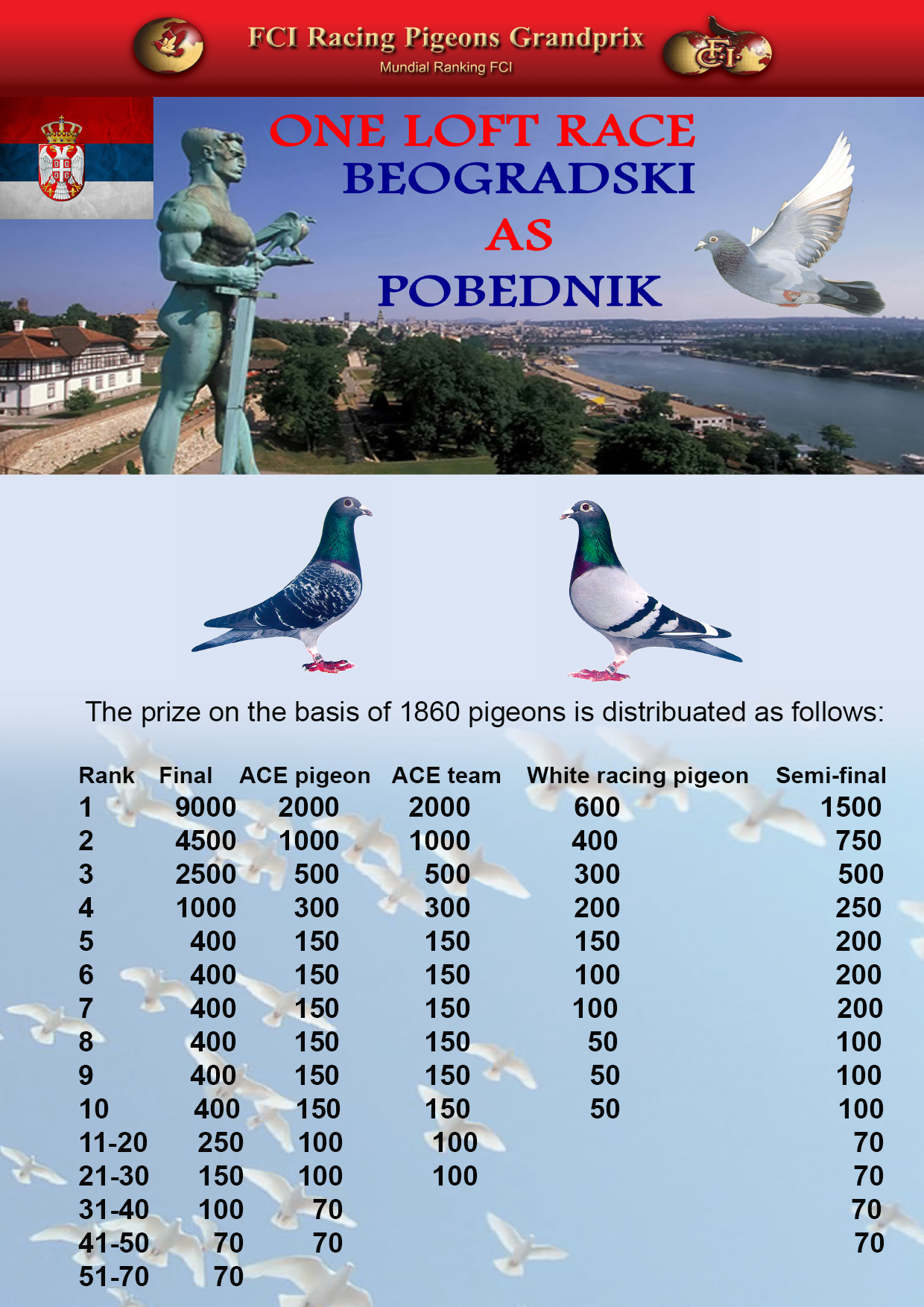 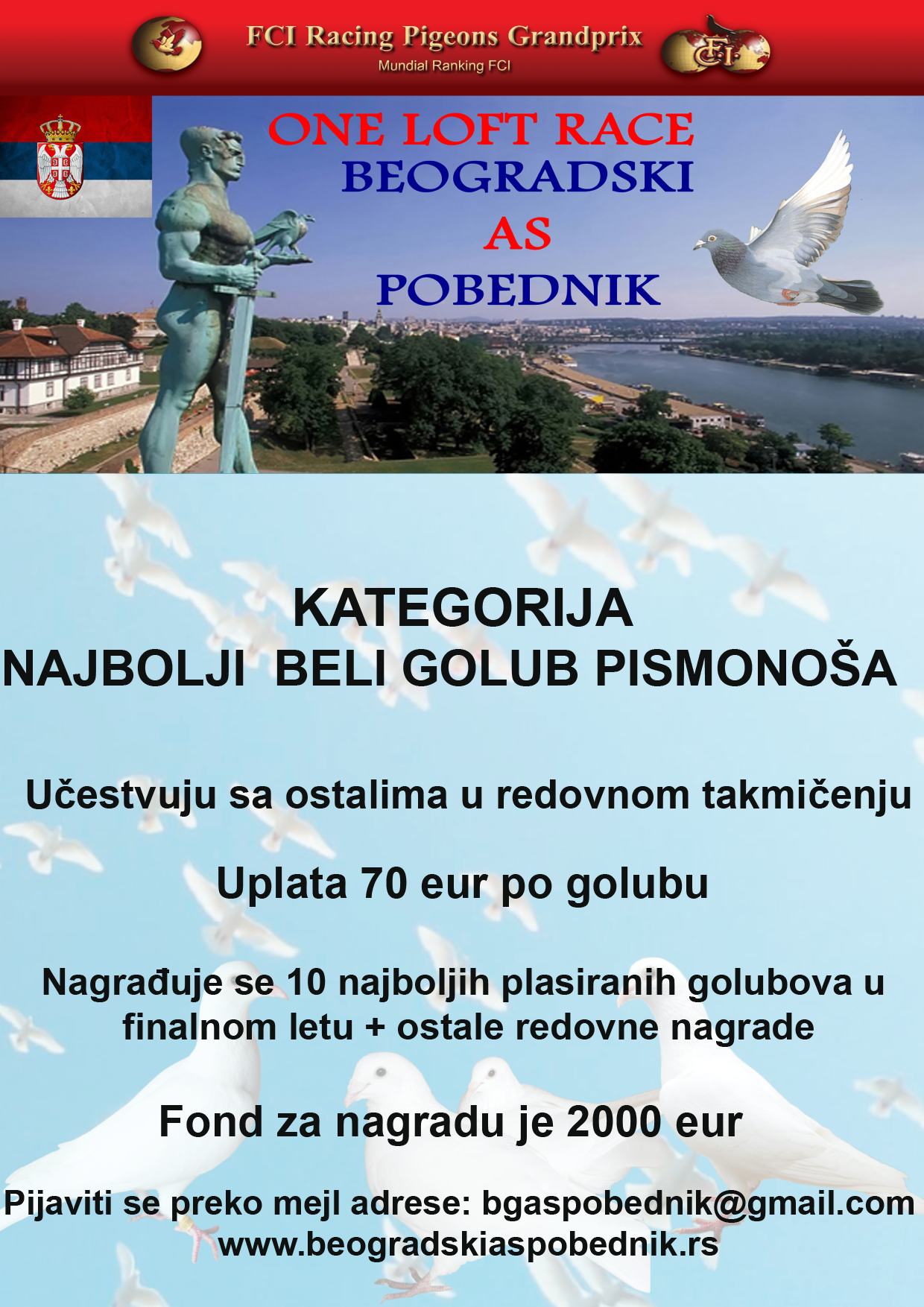 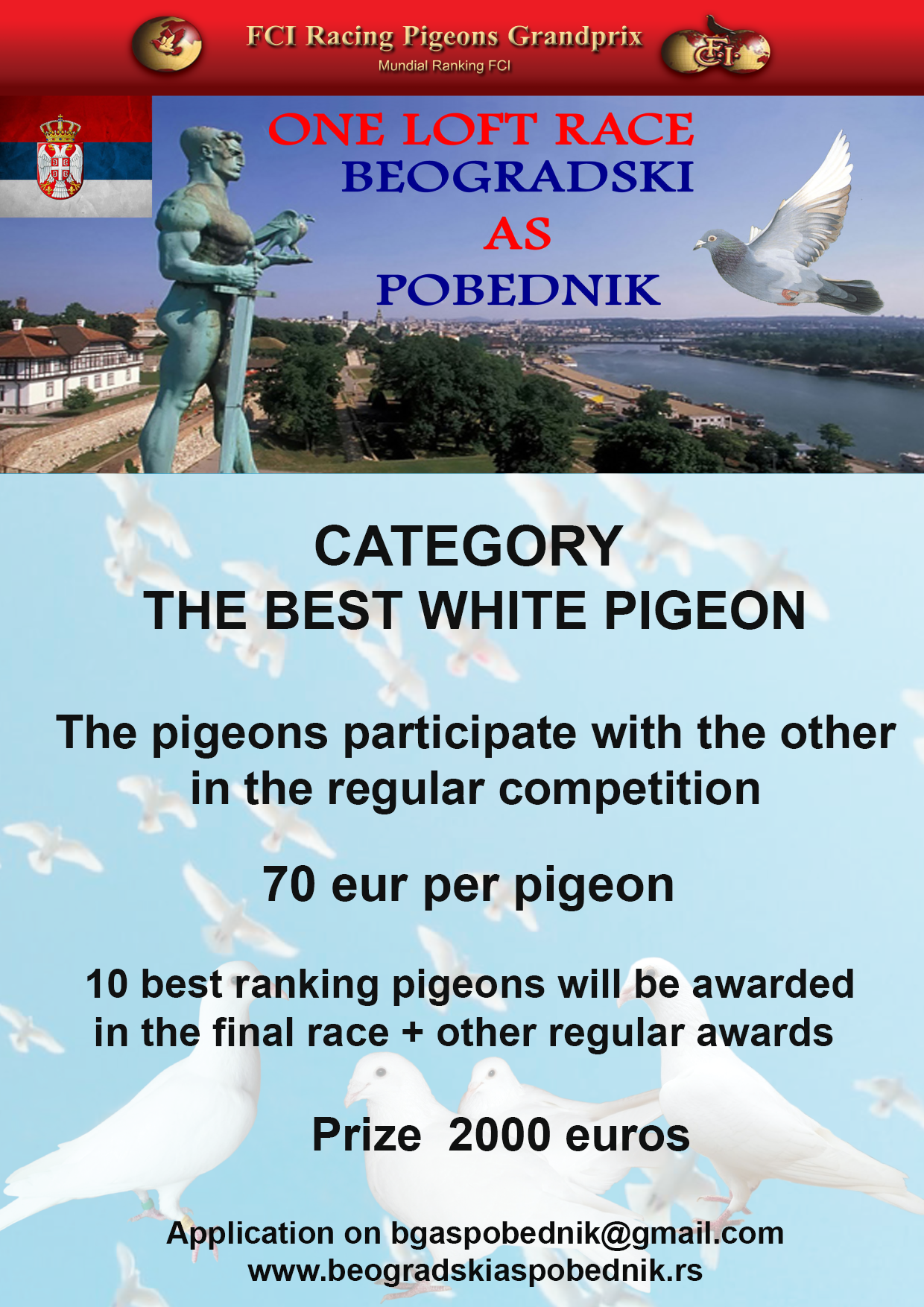